Skip to content
Inspired by the various existing designs of PCB business cards, we were inspired to make a similar thing for Fablab Digiscope.So far there have been popular business card projects which have had LED patterns display, have miniature screens, Magic 8-ball prediction capabilities, act as MIDI controllers, others bring up a text file on a computer when pluged in to USB or offer file storage.

Starting with the constraints:

-We have single and double sided small PCB boards which are business card shaped at 76mm x 50.7mm. However there is also the possibility of working in card stock and laminating vinyl-cut double sided copper tape.

-Because it takes at least 15 minutes to make a single raster pass on a board this size (and around 8 passes to completely ablate the copper), chosing a smaller space on the board to actually engrave is the only way to make this project possible with our time constraints. This may also be another opportunity to revisit earlier tests using the lasercutter in vector mode but this time to offset the vector (by how much?) at least once (probably thrice) to make sure their are no copper bridges this time. This would allow more compositional designs.

-We want to have our name and address written on them “Digiscope Fablab, 630 Rue Noetzlin, 91190 Gif-sur-Yvette” or perhaps just our website “https://fablabdigiscope.gitlab.io/” or just perhaps the logo!

-It has to look cool (composition is an element of the PCB business card “genre”) and/or do something cool!

-Business cards have to be flat – but they can of course pop-out and become 3D at some point. This means that anything soldered to the card also has to be flat. The big question is about batteries, they add thickness, weight but also inelegance, in my opinion. Perhaps the power should come from USB?

-it must have a sufficient number of components to look “technological”.

-obviously to be cost effective the price per card definitely can’t exceed a few dollars.

What it could do:

-a usb device which stores important information for fablab users, such as the fablab charter, information about our website, address, etc. in a text file. The problem I have with making usb connectors out of the edge of boards is I find they don’t work very well.

-a mini pair of joysticks and leds to make some kind of light/memory game.

-a very simple 1381 miller solar engine circuit which causes the card to vibrate every few seconds when in the sun. I like this idea because it associates the lab with clean energy and I find the solar kit I made to be the one which interests people the most immediately.

Technically: this would require SMD versions of the 1381/MCP112 (easy), the 2907 (super expensive), the 2222 (super expensive) and, more importantly, an Aluminum Electrolytic Capacitor SMD version of an 2200uF cap (another cap option is to have four 560uF SMD Aluminum Electrolytic caps in parallel). This raises the question if it’s possible to substitute the transistors with MOSFETs or if using through hole components…

This website: https://www.fetchmodus.org/projects/beam/photopopper/ has an interesting circuit which involves switching the transistors for low-gate-turn-on-voltage MOSFETs (DMN2215UDM-7) which are much easier to find in SMD form. The designer also uses gigantic tantalum capacitors (1500uF!) which are flat. These unfortunately cost 7+ euros each on Mouser. However this circuit appears to be represent an SMD version of the classic solar engine. The designer also uses an alternate of the MCP112 voltage trigger in the ISL88001 which require only 160nA to test the voltage.

under $10USD but that’s a little on the expensive side…

Trying to optimize for cost.

$5USD total is not horrible?

Here are some tests with the composition:

Here is my first shot at the circuit:

Here is an attempt at the USB version:

I gleaned the circuit from various available online:

From the internet I got some answers about the components in the circuit:

The USB signal operates at around 3.3V D- needs pulling up (via 1K5) to signal the presence of a USB device The current limiting resistors (68ohm) protect the microchip from a large current sink by the zeners and also serve the function of a termination resistor for the USB (which is supposed to be around 20ohms). V-USB is the firmware of choice for turning avrs into USB devices it seems.

I’m interested in finding an aesthetic language with the lasercutter PCB engraving process we have at the lab. My instinct is that by pulling a thin layer of yellow paint into an engraved path we can make some text that will really stand out.

With the single-sided board there is a nice effect when looking from the reverse and seeing the yellowish-looking traces.

I tried to do an acetone transfer on both sides of the PCB but that yeilded poor results.

One thing I discovered is that you can lasercut out text and then pass a soldering iron and solder over it to silver-ize it. This means you can have two “colors”, copper and silver. If the text were thicker the effect would be more striking.

I’m concerned about how easy this will plug into a usb jack. In fact in the single sided mode it’s far too thin to insert so it looks like a double-sided board is required or a usb male connector.

Some tests cutting out of metal fabric/tape:

The only way one of the lasercutter produced boards looks good is when it is crammed with components, then the components visually take precedence over the charred background. I am retrying the business card but in a much smaller area to eliminate the visual effect of the majority of the object being charred fiberglass (it also means we can make more of them faster). I’m doing this on double sided board so it is the right thickness for a usb plug. (The double sided board looks less bad with the copper removed, more like mdf than charred matrix).

The parts have arrived, here is an adapted version of Nick Ames’ circuit (https://www.fetchmodus.org/projects/beam/photopopper/):

Here are the specs for the two special ICS:

And here is the PCB:

It turns out with some testing that with these 2V solar panels the minimum is a couple of panels in series along with a 1000-1500uF normal or SMD tantalum capacitor. I’m rearranging the board to accomodate two solar panels and only one capacitor.

If I could do the order again I would have taken the 4.46V KXOB25-01X8F instead of the 2.07V KXOB25-05X3F-TR and then it might have been possible to pull of the card with only a single panel. It might have been smart to take a lower voltage version of the voltage trigger (2V instead of 2.9V maybe).

For the interest of time it seems silly to engrave a large board only to use a portion for the circuit. It might be possible to cut a smaller board and integrate it into a cardstock business card form. This could be achieved by delaminating a part of the business card and installing the circuit board there.

Here is the board assembled and working (after a long debug which concluded that there was a short under a capacitor in the board. Better checking of the board before soldering being the solution.)

Here are some options for how the circuit could be integrated into a business card:

And here is a mock up of what the card could look like:

Talking with our doctorat student Nawel she had some ideas for how to improve this prototype:

-why not lasercut the card itself, and make the card represent a hybrid of everything that is possible to make in the fablab? Printing the card on card is not easy to do in the lab. -we could 3D print a kind of stand that cool keep the card standing up so that the panels face the sun.

I don’t mind that the card won’t “work” unless it’s sunny, but it would be nice to have a lamp which would allow us to show how it works when there is sun when it is overcast.

The associations with the card that are good for us are the renewable energy element and the designing with a connection to nature. It’s also nice that the card vibrates – the card is suggesting it is associated with dynamism and that the fablab is by extension a dynamic place.

The USB version of the card for me is kind of dead as it leads to a series of driver issues with certain kinds of windows which is not optimal.

Here is a result I am happy with:

Here is how it all fits together and folds to stand upright:

Making the first run of multiples to check how easy the process is.

The effect of having six of these boards in your hard when the sun out is quite something. It’s as if they are a swarm of bees.

I originally thought it would be neat to combine acetone ink transfer with lasercutting but the results were dissapointing:

This project clearly needs to move in the direction of paper PCB or acrylic substrates: 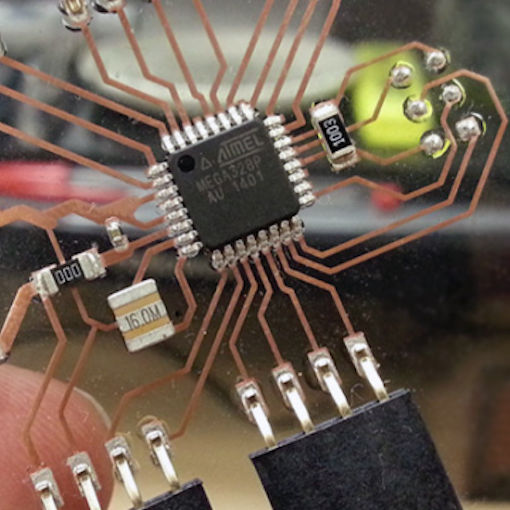